Almost 45 years ago, the daughter of Hollywood icons Tony Curtis (Some Like It Hot) and Janet Leigh (Psycho) became a horror film superstar. No one screamed as insistently as she did. She became the face of an entire genre, appearing in several blockbusters by the master of horror, John Carpenter. In the final showdown, Jamie Lee Curtis, aka Laurie Strode, takes for the last time on the boogeyman, Michael Myers, in Halloween Ends. 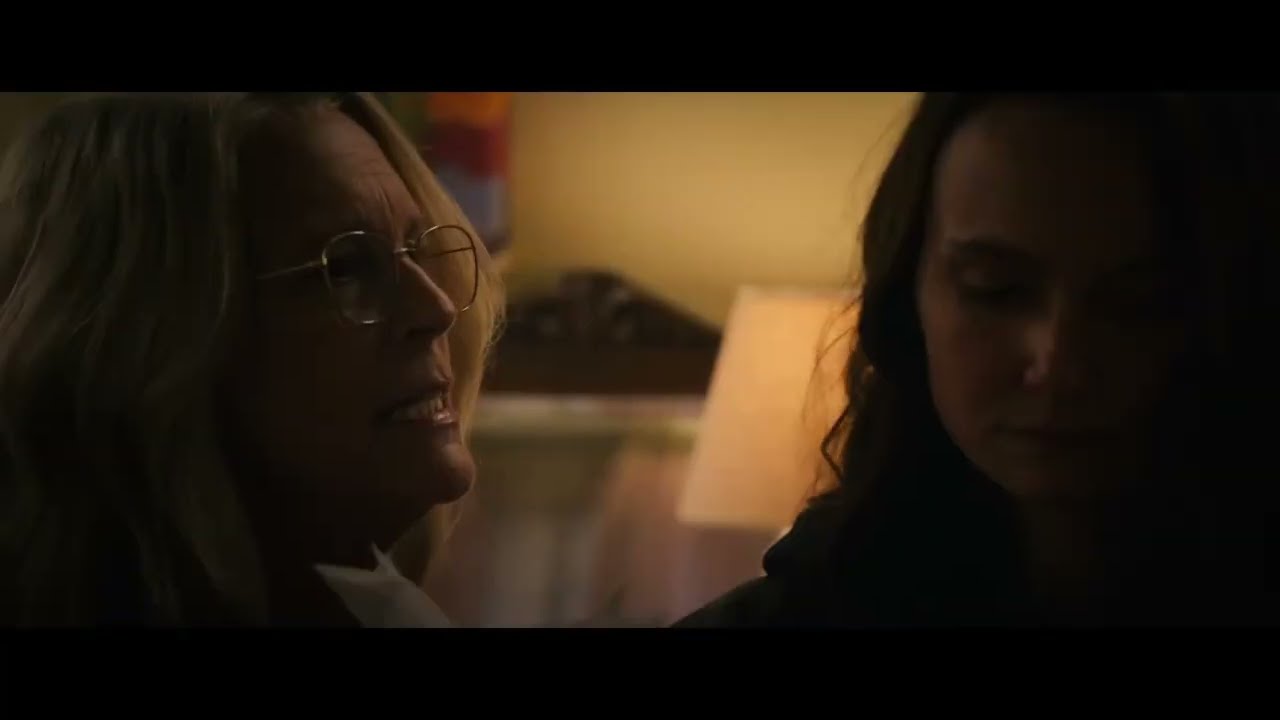 In 1978, John Carpenter shocked the world for the first time. Then, a little boy murdered his sister in cold blood on Halloween, becoming a bloodthirsty, invincible monster. The rest of the story is just cult. Because not only Carpenter’s subtle thrill but his specially composed music set standards in the horror genre.

Unfortunately, Michael Myers ran out of breath in the second round of carnage. So, the subsequent eight Halloween adaptations couldn’t match the depth and thrill of the originals.

But on the contrary. Although the sequels showed some new ideas, it wasn’t enough to keep the original fear of the dark boogeyman and subtle horror of the original must from giving way to now hackneyed patterns of the genre. Horror became grotesque. 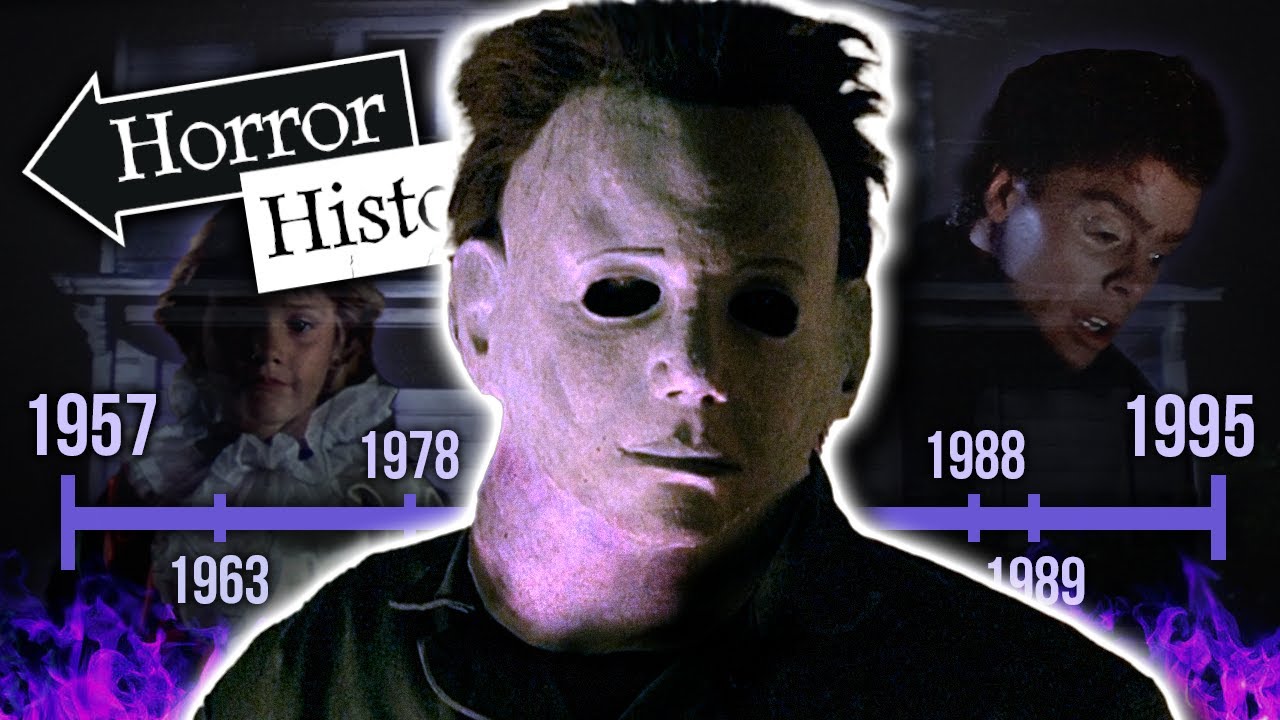 However, the initial thrill returned with “Halloween” in 2018. The producers went back to the story’s roots, including the cast. Unfortunately, the sequel “Halloween Kills” failed again to maintain this level. So, many fans thought that the producers should realize that the story is told, and even die-hard fans don’t need a sequel anymore. So, at the latest after Halloween Kills, the question arose as to whether the fight between good and evil, i.e. between Laurie Strode and Michael Myers, needed a sequel to let Halloween ends ultimately.

It’s been four years since the Halloween Kills massacre. Michael Myers has vanished. So, finally, some peace came to the small town of Haddonfield. Time for Laurie Strode to write her memoirs and break free from years of fear and terror. Unfortunately, this peace does not last. Because also the people of the small town are little monsters. 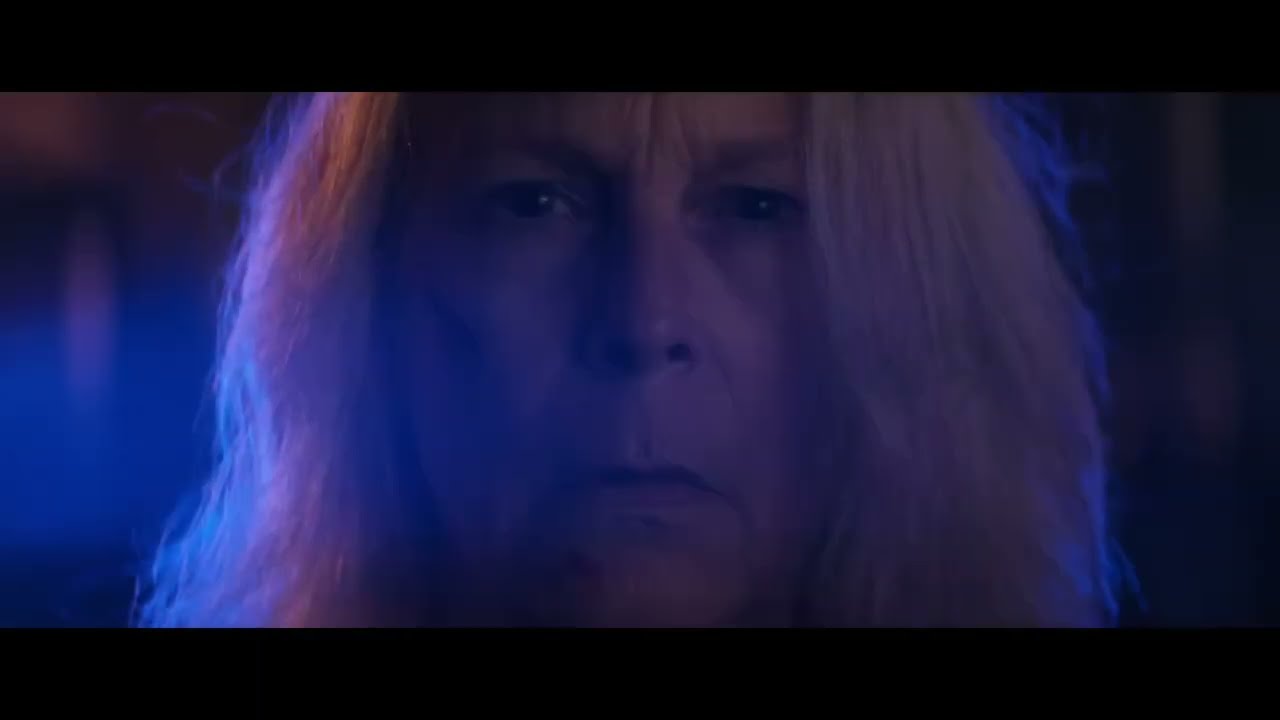 On the one hand, some of the citizens like to harass those who are weaker. On the other hand, they treat Laurie and her granddaughter Allyson like freaks since what happened four years ago.

No wonder the pretty nurse falls in love with the misfit Corey. A certain mysticism surrounds him, which seems to extend to the young couple. Both unite more and more magical ties until that moment when the old evil suddenly reappears on the scene. Michael Myers is back.

Despite or perhaps because of her age, Laurie is still full of energy and sophistication. She tries to come to terms with the quiet life of a small town. However, it’s not easy. Unfortunately, her reputation precedes her. People don’t see her as a heroine who survived countless attacks by Michael Myers and even lost her daughter to the boogeyman. On the contrary. The philistines see Laurie as nothing more than a freak who magically attracts mischief. 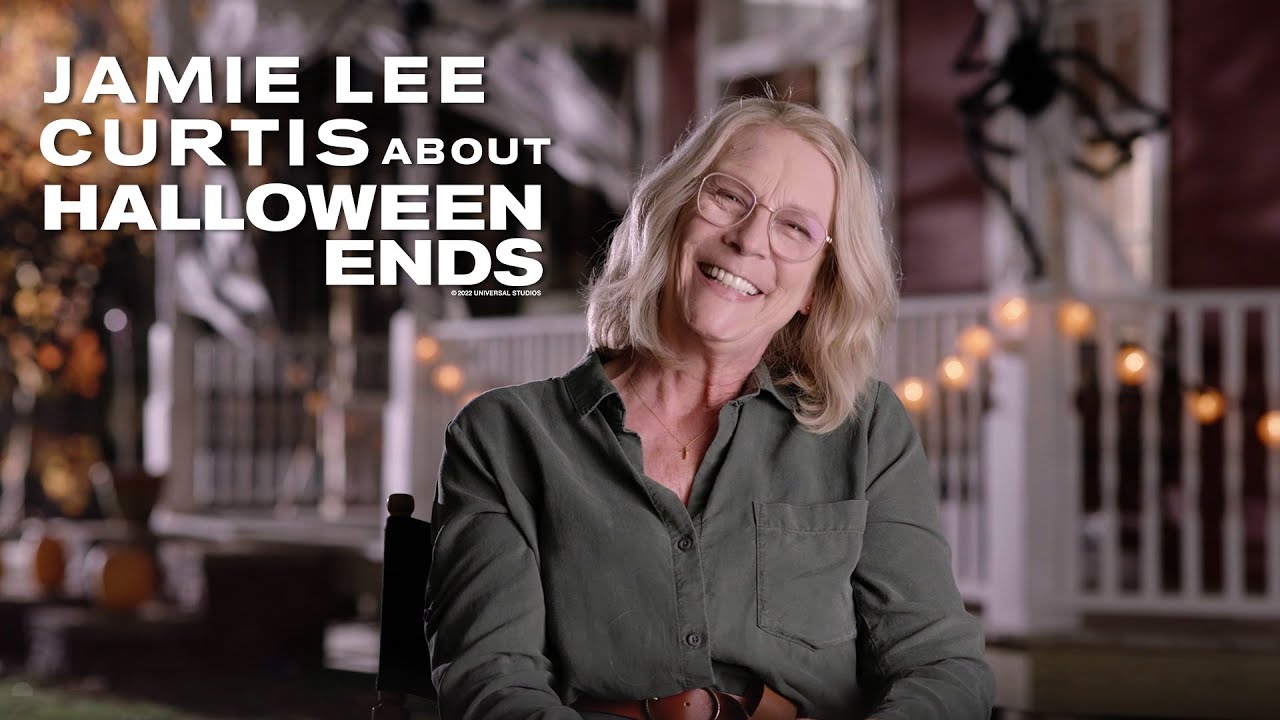 Alongside Mark Hamill as Luke Skywalker and Harrison Ford as Indiana Jones, Halloween Ends has made Jamie Lee Curtis one of those stars who have been able to play the same film role over and over again for four decades. She was only 20 years old when she first faced Michael Myers. She remembers:

We made that first movie for nothing in 1978 in 17 days. But, at its core, there was something that has carried on for 44 years.

I have spent a lot of time – ever since I rejoined Laurie Strode for this new trilogy – asking, ‘Why me? Why her? What is it about Laurie and Michael that has survived the test of time?’ What I have now come full circle to, appreciated, and embraced, is that Laurie is and was everyone’s hope for the possibility of a happy life. She represents everyone’s sister, best friend, daughter, niece, and granddaughter.

No one understands better that Laurie is an avatar of a life interrupted, a survivor who has spent her life trying to not let an inexplicable evil chart her path and define her existence. It’s particularly meaningful that Laurie Strode has become a symbol of female strength, resilience, and endurance worldwide, and that the success of this character and these films has helped pave the way for a new generation of strong, layered female film characters. Not just in the horror genre, but industry-wide.

The legacy of Laurie Strode is directly attributed to Debra Hill, Curtis says.

Laurie Strode was conceived and written by director John Carpenter and late producer Debra Hill. Unfortunately, Hill died of cancer in 2005 at the age of 54. Curtis continues:

Laurie’s vulnerability, intelligence, and strength are in all of those original women in the first film – Linda, Annie, and Laurie. Her imprimatur on Halloween is indelible. It’s never to be removed. The gentle soul of Laurie and that fierce warrior spirit are the legacy of Debra. As a feminist, she’d be very proud of how women are represented, and how Laurie has evolved as a character. With the deep emotionality, incredible bravery, and physical prowess she demonstrates in this trilogy. I know that she’d be incredibly proud of her contributions, which are forever.

Jamie Lee Curtis can also be very proud. She is one of the few Hollywood stars with the strength and self-confidence to age gracefully. That gives the actress a special glow, a beauty that nothing can surpass.

In this way, Jamie Lee Curtis reflects, in her own way, a unique emotionality and authenticity.

In addition, her unique, black humor flashes again and again in her role as Laurie Strode. Both – Laurie Strode and Jamie Lee Curtis – fight their final combat against archenemy Michael Myers with flying colors in Halloween Ends.

Allyson went through terrible things four years ago. Michael Myers rampaged through Haddonfield, killing her father, Ray, and later her mother, Karen. Well, in Halloween Ends, she, like her grandmother Laurie, is considered by the small-town folk as more of a freak than a heroine, who deserves respect and sympathy. 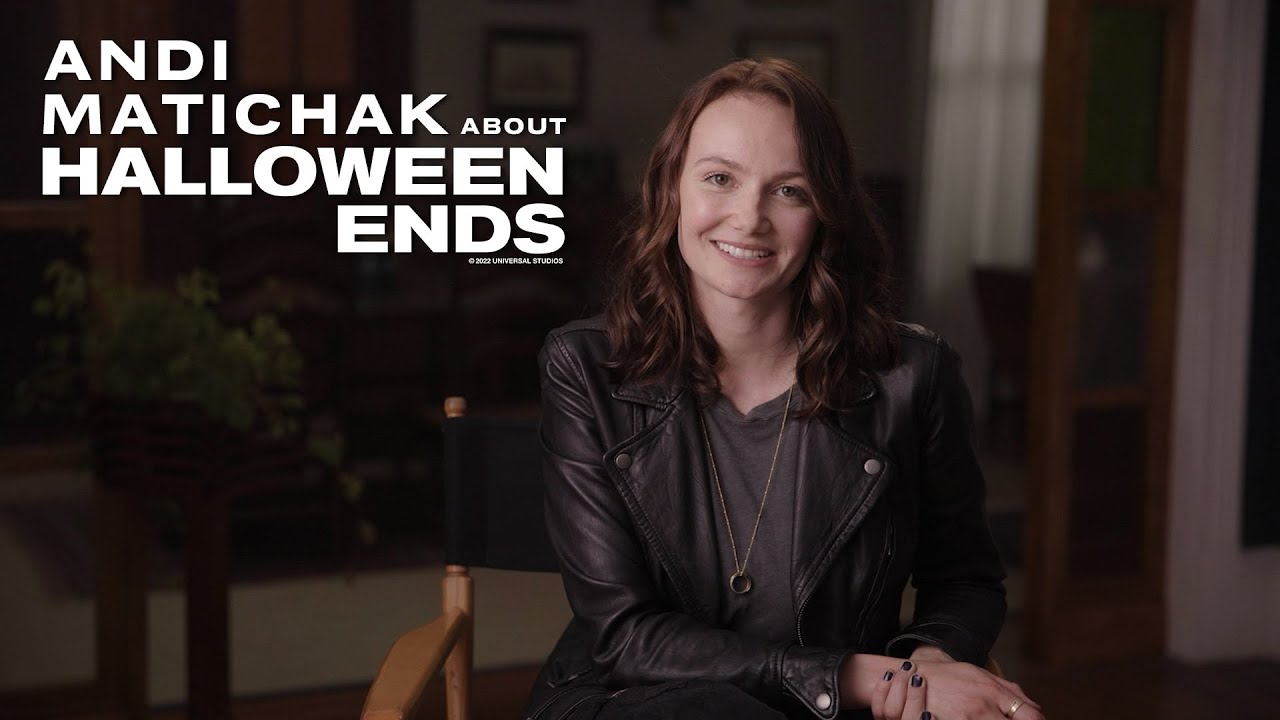 So, it’s not surprising that the pretty girl feels attracted to the outsider Corey. She meets him through her grandmother, who soon discovers strange features in the handsome boy. But Allyson no longer wants to be protected by Laurie. Rather, she wants to go her own way, even if it leads into darkness.

Unmistakable, Andi Matichak is a beautiful woman. So, it’s no wonder that her career began as a model. During her jobs, a talent scout discovered her and recommended that she should become an actress. Luckily! Because that’s how Andi appeared in series like 666 Park Avenue, Orange Is the New Black, Underground, and Blue Bloods. In 2018 she finally had her breakthrough on the big screen as Allyson Nelson in Halloween.

Corey is unlucky. First, he has a mishap at his job as a babysitter. Then he is harassed by a small-town gang. And finally, things awaken in him that he cannot explain himself. Corey is good at heart. However, despite Allyson’s best efforts, it seems he will never get a chance to find peace and love.

Rohan Campbell is a new face. At least as far as the cinema screen is concerned. We have already seen him on the home screen in many TV productions. However, Halloween Ends is the breakthrough of the handsome Canadian with British roots.

His, on the one hand, rebellious and, on the other hand, introverted performance is reminiscent of James Dean. So, it shouldn’t come as a surprise if we see the young actor in many other productions in the future.

We already know Lindsey from the 1978 original. She was the little girl that Annie, Laurie’s best friend, babysat. Little Lindsey had to experience all sorts of terrible things back then. 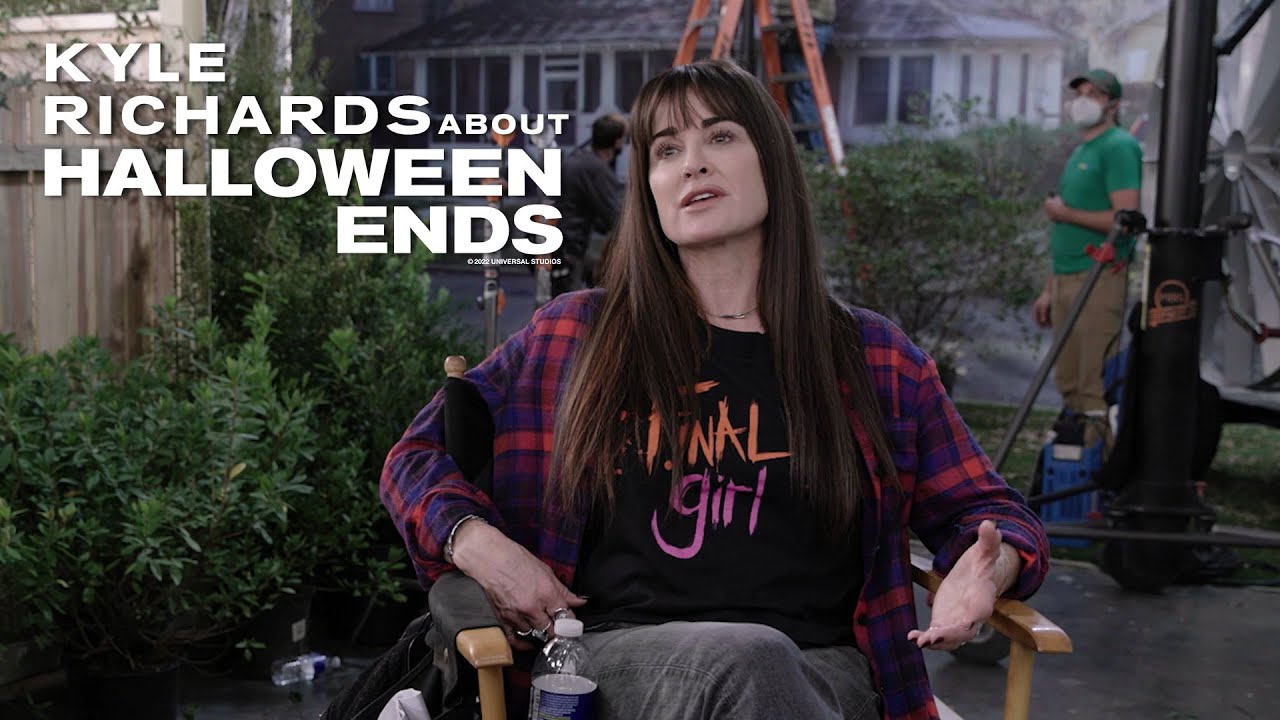 Since Halloween Kills, she has reappeared. Now that she’s grown up, she runs a bar that Allyson and Corey also like to stop. So, also for the traditional Halloween party.

Kyle Richards had his first successes as a child star in Little House on the Prairie. Even though she later played in many productions, the big breakthrough never materialized. However, with her character of Lindsay Wallace, she brings a touch of nostalgia and sensuality to Halloween Ends.

What began 44 years ago with a big bang comes to an end now. After many bad sequels, the question arises again if the story and audience really needed Halloween Ends. The answer is simple and a resounding yes.

Because with Halloween Ends, John Carpenter and the team return to the story’s origins. He delights the Halloween fan community with a lot of nostalgia and thrill. Of course, Jamie Lee Curtis literally plays the leading role. She guides us through the dreary small-town idyll, full of strange characters.

She makes us smile as she flirts with Deputy Frank Hawkins like a teenager falling in love for the first time.

The other characters also perform very well. Furthermore, they have enough space to develop their personalities. Their playing is authentic and haunting, as is the story itself.
Of course, it might not be described as profound. Howsoever, it’s dense and very emotional. The black humor, which runs like a red thread through the film right from the start, also contributes to this. You can look forward to really bizarre moments.

While it’s hard to scare or shock people in 2022, Halloween Ends still offers its horror moments. They make the movie surprise and cringe even for seasoned horror fans. Moreover, the music is still driving after four decades. Even during the opening credits, which are kept in the iconic style, the score gives shivers down our skin.

Halloween Ends is a very worthy conclusion to this story that has been with us for four decades. We have grown fond of the characters and saying goodbye always hurts. So, the flashbacks and summaries in Halloween Ends are sure to touch a lot of fans. The charm and humor of the film, however, let us endure this farewell with a smile and the joy that John Carpenter has once again given us a really brilliant, entertaining film that is absolutely worth seeing. Thank you and R.I.P. Michael Myers.