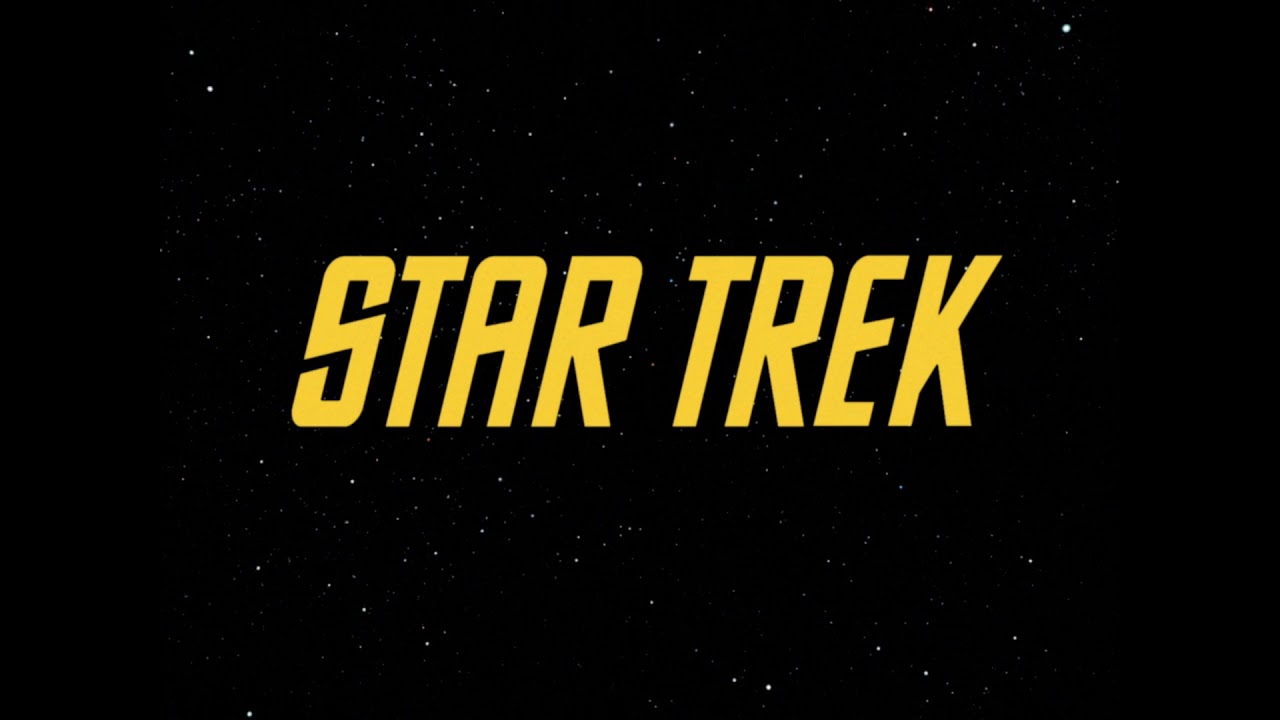 In the 1980s, the Cold War raged. People were not only afraid of a devastating nuclear war. Rather, they worried about a nuclear catastrophe. That was also not long in coming. And so it finally crashed in 1986 in Chornobyl, Ukraine. It was also the time when the world population became aware of the effects of industrialization, resulting in climatic change and other problems. Does it all sound very familiar? It is! Because after a period of blind carelessness, exactly the same worries and fears have been piling up again since this year. At the latest. People are unsure about the future. However, there is a Si-Fi series that has had some great solutions already 66 years ago. So it’s time to celebrate the countdown to the official STAR TREK DAY. And so, we present the VALEUR STAR TREK WEEK 2022 and an amazing STAR TREK Sweepstake for old and new fans.

Of course, real fans know what is meant by these lines. Because STAR TREK has many wonderful ideas and secrets in store for everyone. No question, the special effects were superb. But they never were the sole focus. Rather, it was always about grandiose stories about courage, loyalty, and friendship. Moreover, these stories were often based on current affairs and even philosophies, actually partially unloved in America.

a vision of a (better) future

For example, there is no money or wealth existing in the United Federation of Planets. Everyone is equal and has corresponding rights.

In many episodes and in the films, communist ideas resonate that would probably never have been broadcast ten years before the first episode was released. Because at that time, in the days of McCarthyism, any communist or social liberal ideas were suppressed, also in the film business. Howsoever, let’s look back at the year 1966.

It’s halfway through the Vietnam War. Martin Luther King fights against racial segregation and inequality. And Gene Roddenberry isn’t talking about diversity, but about bringing together a crew of diverse races and cultures for the first time in film history.

There’s, of course, Captain James T. Kirk from Riverside, Iowa. On the one hand, he demands absolute loyalty and obedience from his crew. He, on the other hand, does not get along so well with authorities and orders.

Instead, he is often a real daredevil who doesn’t shy away from danger or any risk. In doing so, he sometimes turns one or the other Enterprise into a total loss. However, for his team, he would die. And he knows he can always count on his crew.

Born on March 22, 1931, in Notre-Dame-de-Grâce, Montreal, Quebec, Canadian actor William Shatner became a cult figure through Star Trek, as did the character of James Tiberius Kirk, whom he embodied for many decades.

He played the captain of the USS Enterprise in a visionary way, imperfect, vicious, and sometimes overshooting the mark. Of course, this made him a role model for many.

And we could need such role models today. A time, when many believe that they can influence others through artificial perfectionism.

Shatner was also given a special moment. He took part in Blue Origin’s second sub-orbital human spaceflight on October 13, 2021. Aged 90 years, he became the oldest person to fly into space. 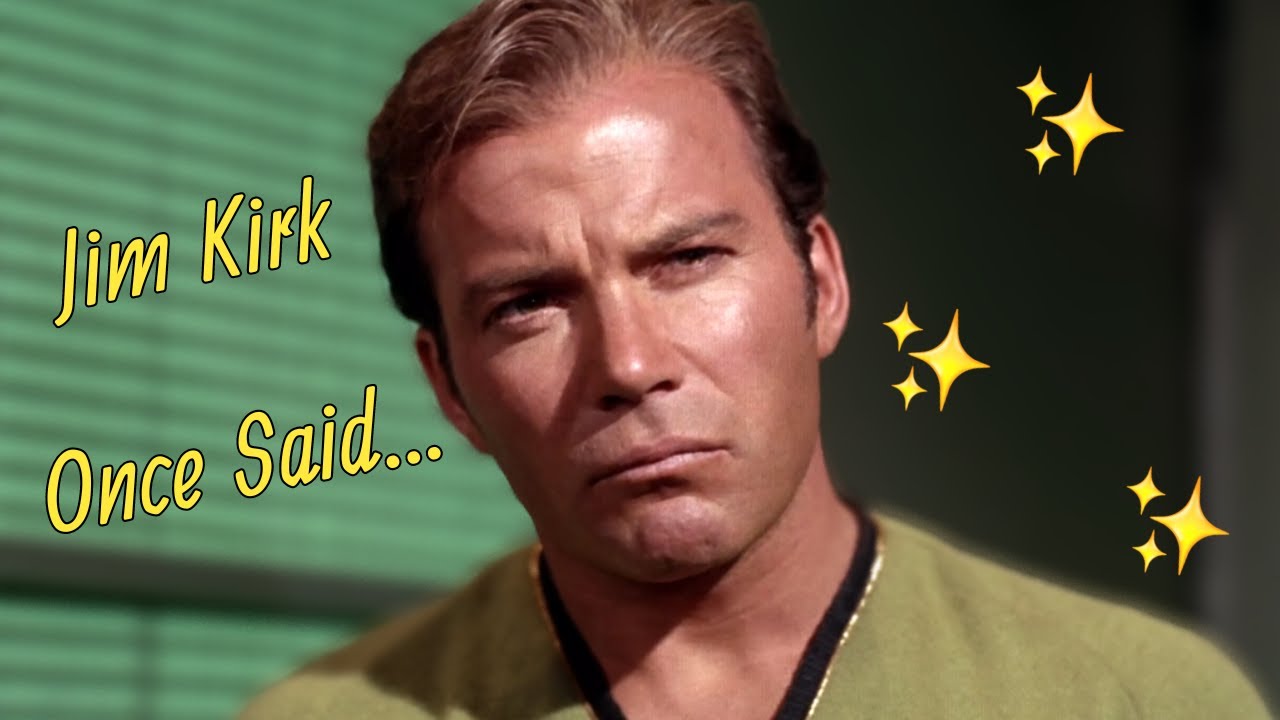 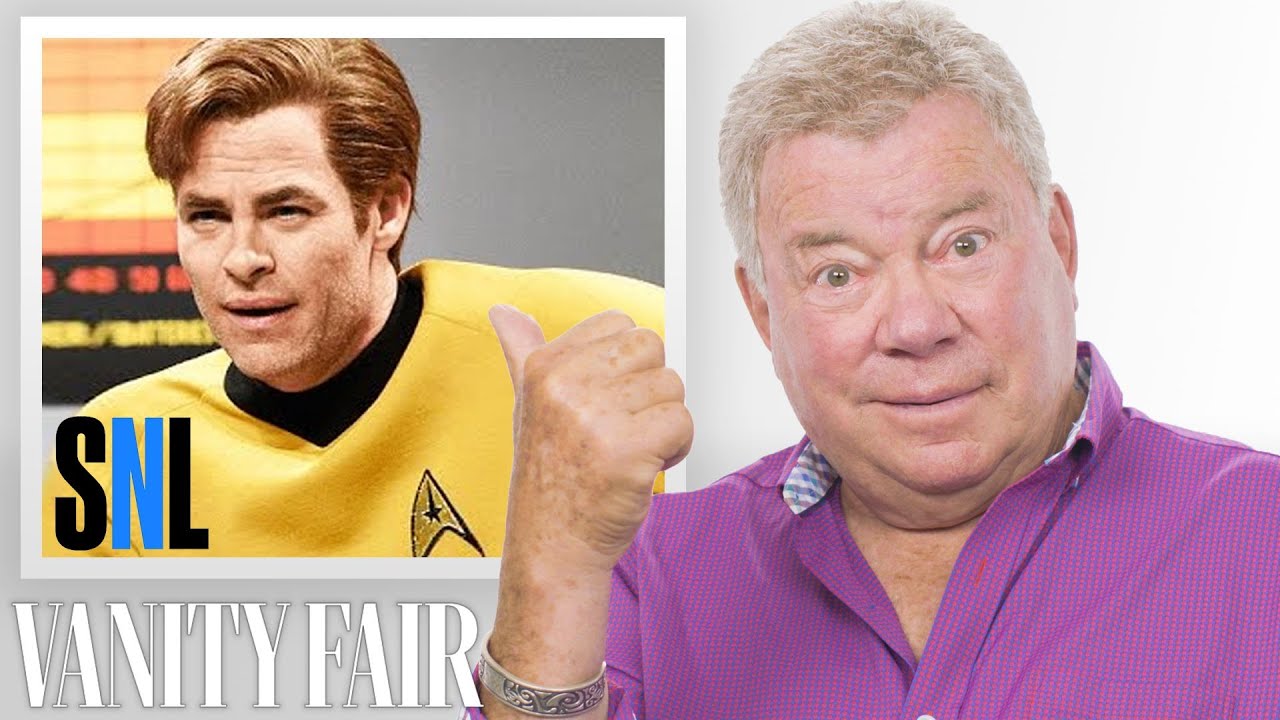 In a broadcast talk, Shatner described experiencing the overview effect, as a deepened understanding of the fact that the ecosphere of the Earth is but a thin, fragile skin enveloping its planet. 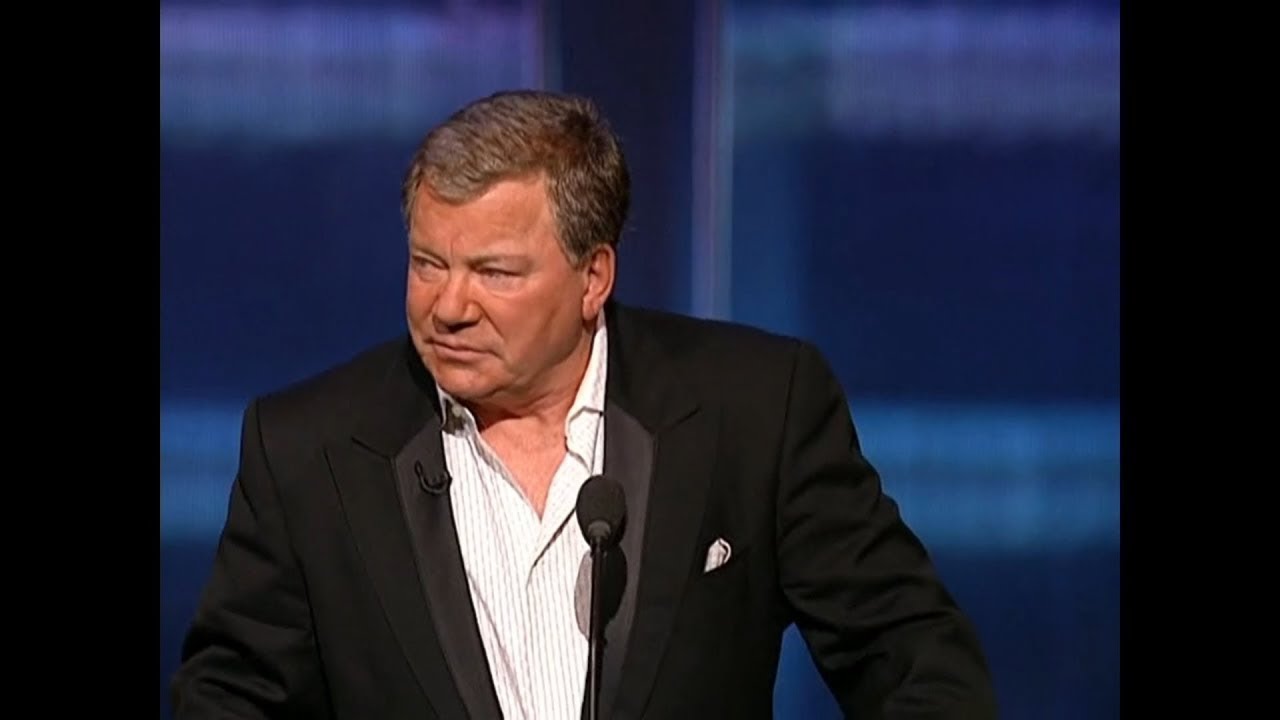 Always by Kirk’s side is Science Officer and First Executive Officer Spock. His mixed human-Vulcan heritage is an essential aspect of the series and the six theatrical adaptations. Logic always prevails with him. Only occasionally does his human side win for a moment.

Then, he shows pride or doubt. Even Spock’s first appearance, with his pointy ears and controlled demeanor, was a milestone in film history. Probably everyone tried to imitate the Vulcan salute back then. The cult went as far as funny adaptations like in films like Back to the Future.

Leonard Nimoy was born on March 26, 1931, in Boston, Massachusetts. In contrast to many others from the original series, he was able to celebrate further cinema successes outside of the Star Trek universe even after its end, despite his striking appearance. Not only as an actor but also as a writer and director.

So, he was responsible for directing Star Trek III: The Search for Spock, and Star Trek IV: The Voyage Home. Furthermore, he directed various comedies. 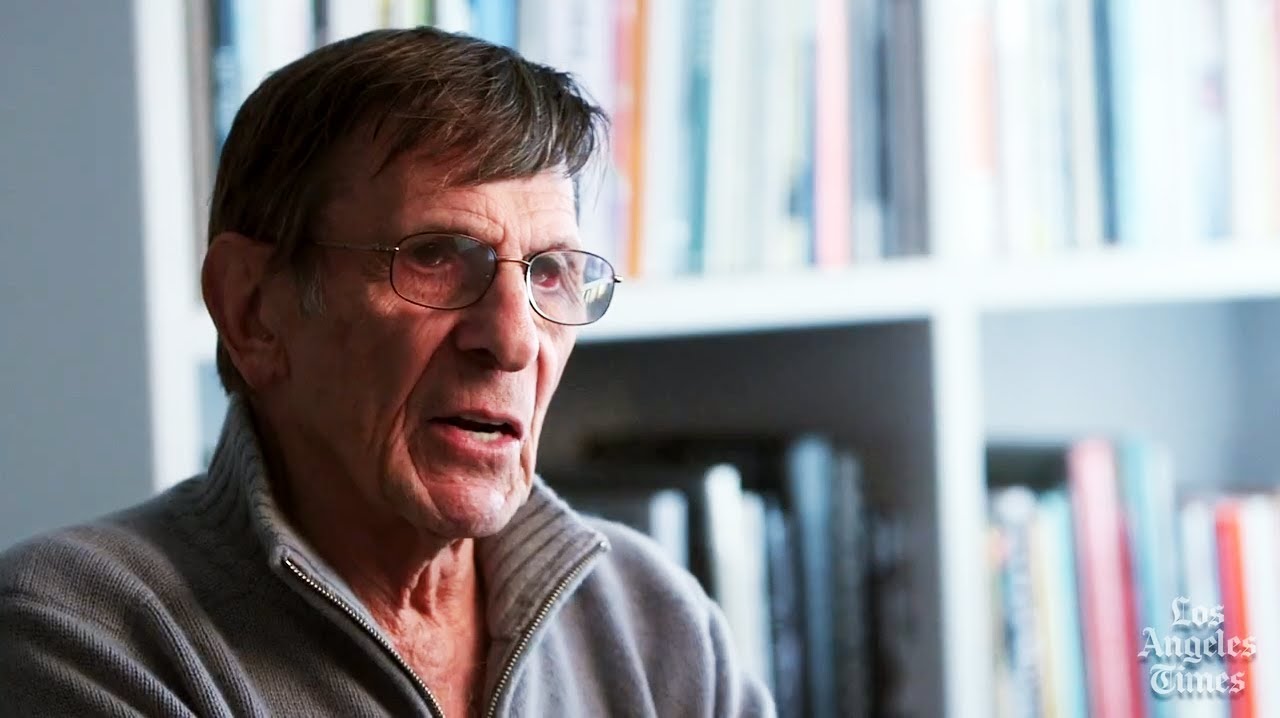 On February 27, 2015, he left the Enterprise bridge forever. In memory of this great man, NASA astronaut Terry W. Virts took this photo of the Vulcan salute from the International Space Station, in orbit above Nimoy’s hometown of Boston, on February 28, 2015.

Especially Spock’s heated discussions with the ship’s doctor Bones a.k.a Dr. Leonard McCoy, from Atlanta, Georgia, are legendary until today. McCoy is Spock’s counterpart. He is often in doubt and anything but brave.

Nonetheless, Bones is always there when his friends or the ship need him. McCoy was probably the most grounded of the USS Enterprise crew. In the Star Trek series and even more so in the films, it was he who provided humor and deep emotions.

DeForest Kelly was born on January 20, 1920, in Toccoa, Georgia. Before STAR TREK, he acted in many films, mostly in minor roles. Star Trek became a fate for him too. Because he became so attached to his role that everyone who saw him immediately identified him as Bones. 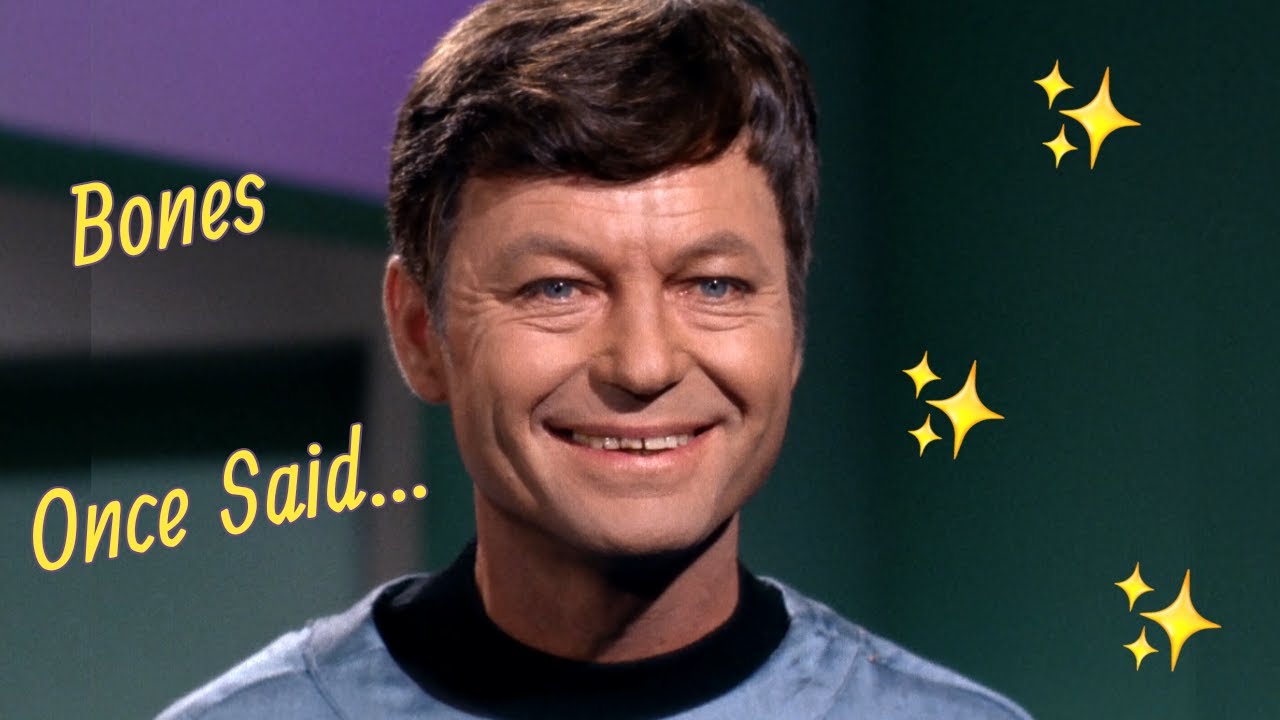 With his death on June 11, 1999, he became the first crew member to leave the planet forever. His ashes were scattered over the Pacific Ocean.

But what would these guys be without the articulate Lt. Uhura? Because the translator and communications officer, who comes from the United States of Africa, is specialized in linguistics, cryptography, and philology. She decodes some secret messages and even communicates with the Klingons. 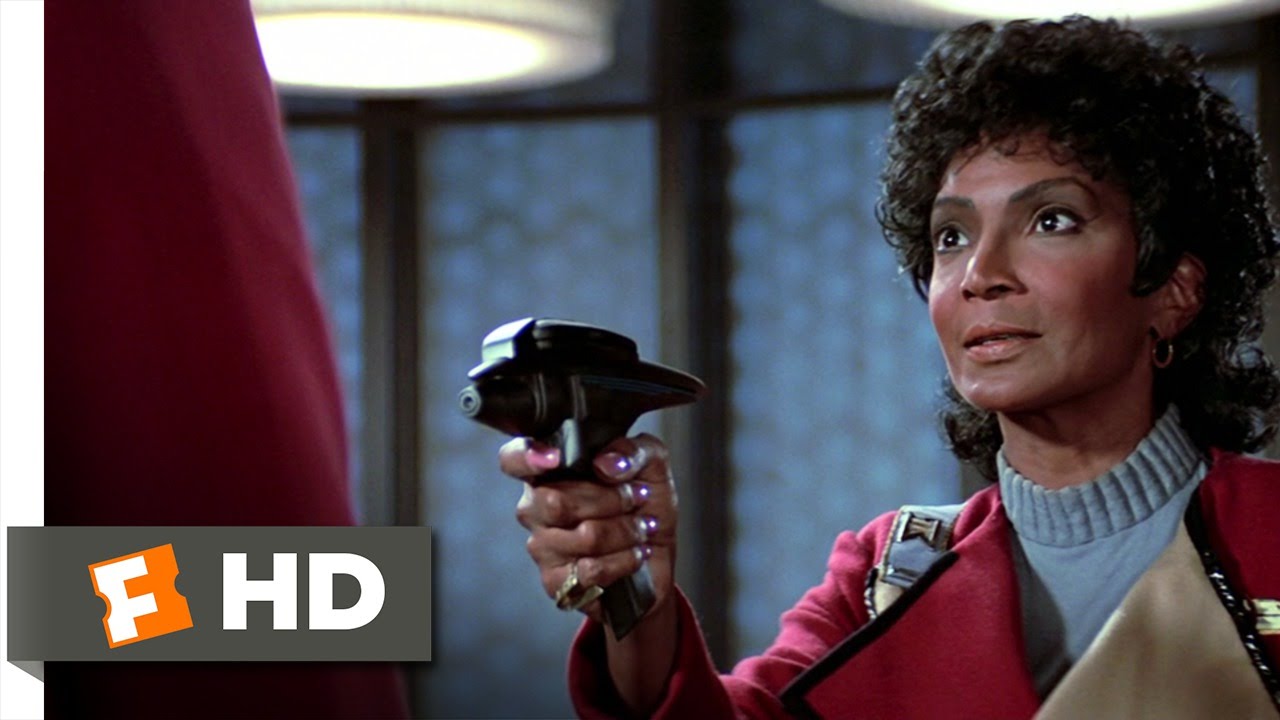 Her first name remained a fascinating secret for the fan base for many years. Only those who listen and look carefully can hear Spock pronouncing her first name in an intimate moment. The remakes finally solve the mystery. There, we learn that her full name is Nyota Uhura.

Her character represented a radical change on many levels. Because the beautiful Nichelle Nichols was the first black actress in a US TV series who starred in a leading role. Hard to believe today, but back then, it was an absolute novelty. As did her kiss with Captain Kirk in the episode Plato’s Stepchildren. 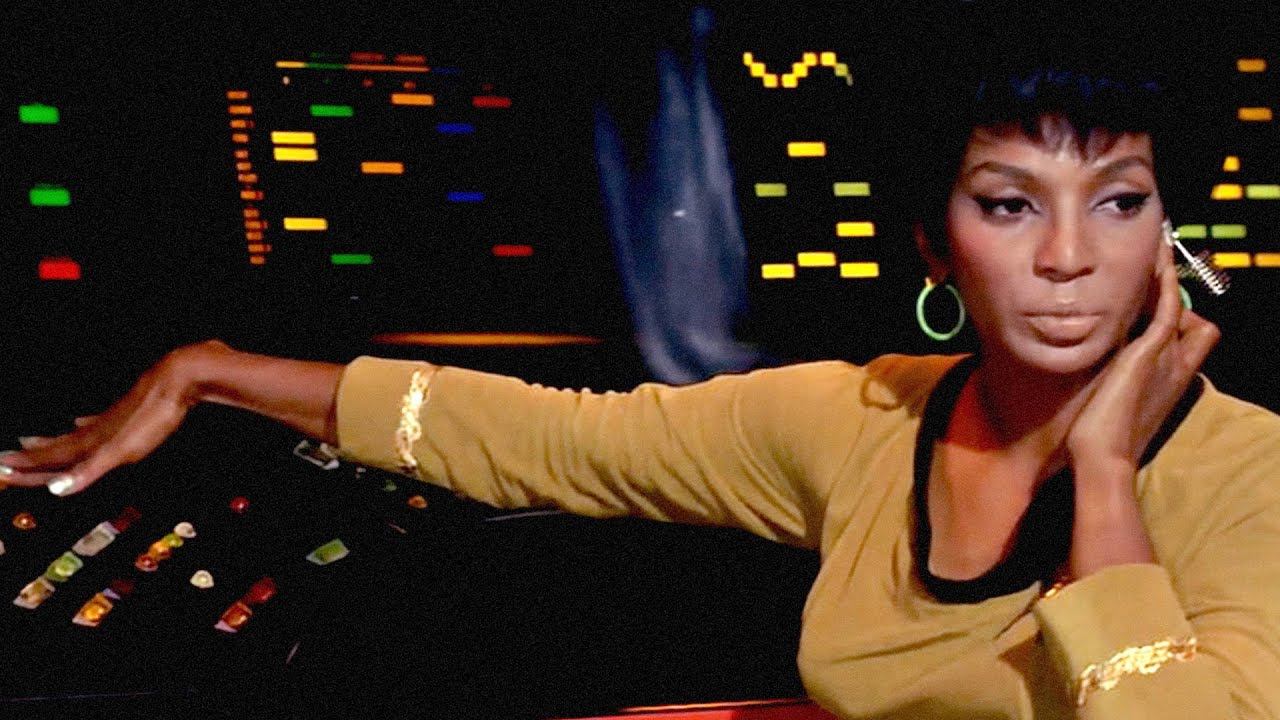 While it wasn’t the first kiss between a black and white actor, it was still daring at the time. Unfortunately, this summer, on July 30, 2022, to be precise, Nichelle Nichols has hurried ahead of us into the unknown reaches of the universe. 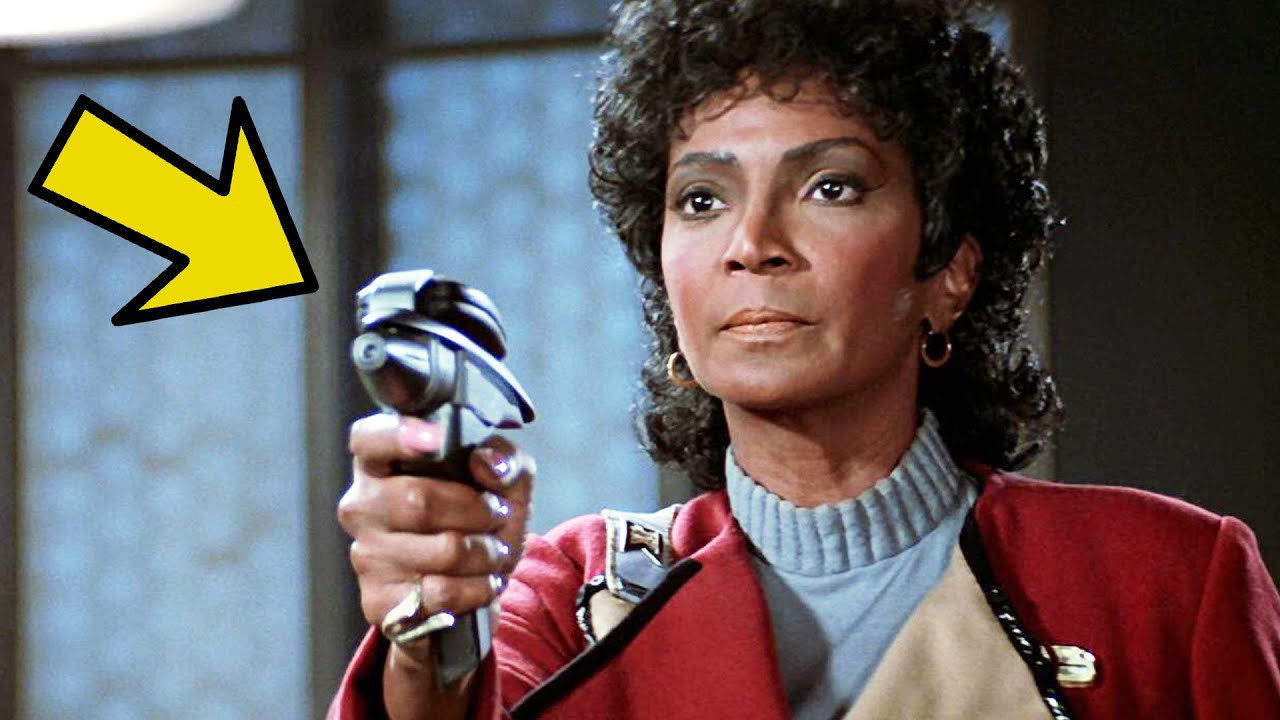 Give me two hours… One of the most popular figures on the USS Enterprise is the ship’s technician and lieutenant commander, Scotty. As a second officer and “miracle worker” chief engineer, he commands the ship and records its log when both Captain James T. Kirk and First Officer Spock are not aboard.

Nobody knows the Enterprise as well as he does. And yet, he often stands between the captain’s orders and what the ship is technically capable of. As his name suggests, he grew up in Aberdeen, Scotland. That’s why he also loves a good glass of Scottish whiskey. 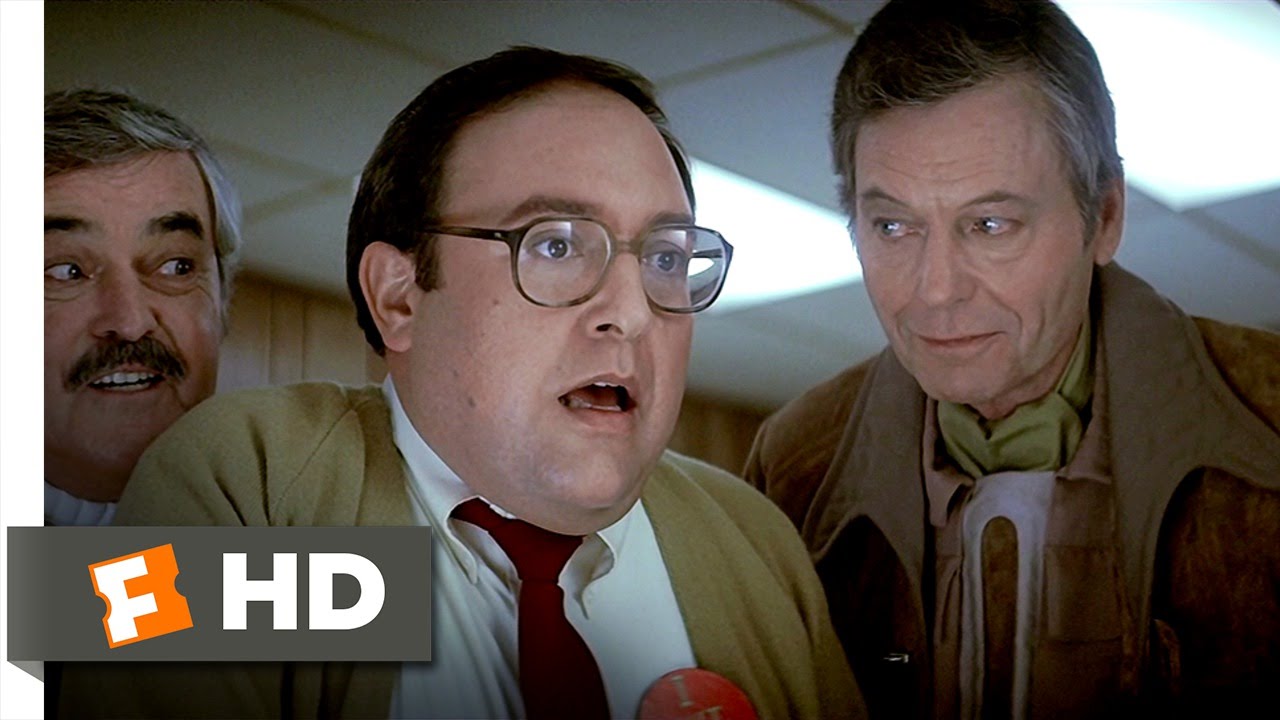 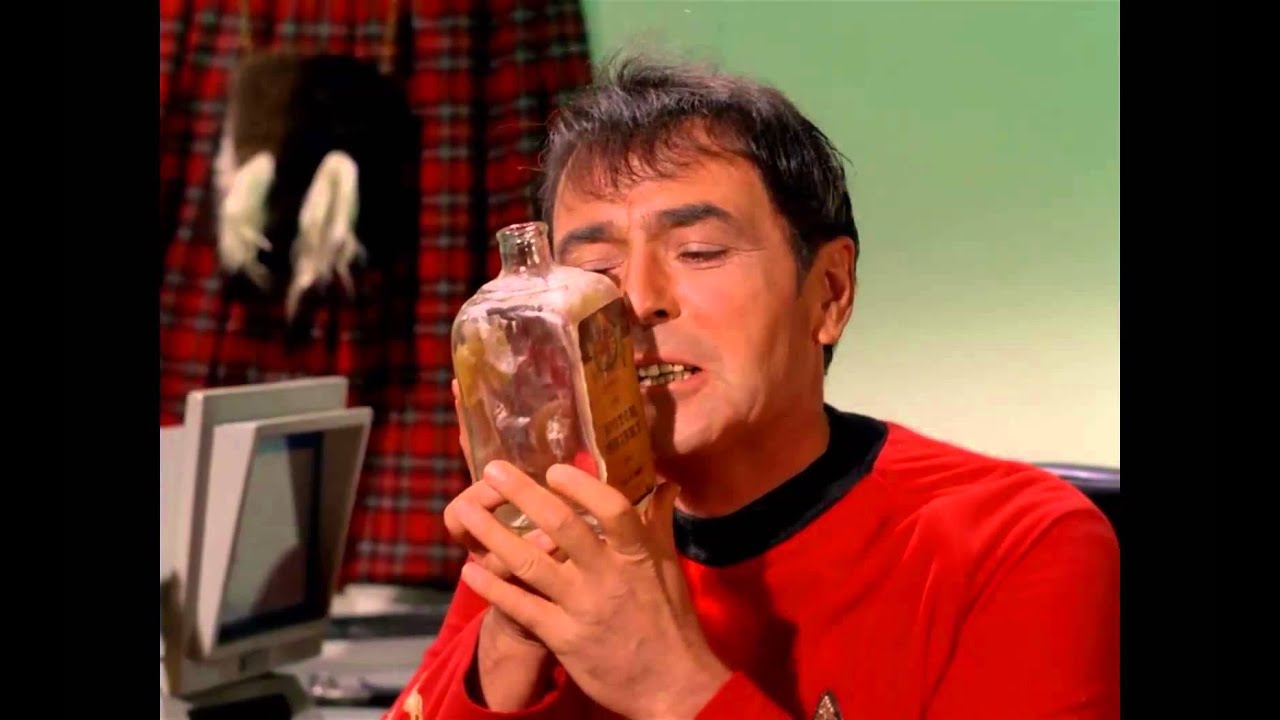 James Montgomery Doohan was a Canadian actor born on March 3, 1920, in Vancouver, British Columbia to Irish immigrants. James became so Scotty that this one role would define his entire life. Finally, on July 20, 2005, he couldn’t get the machines going any longer.

His son Christopher, who appeared in the first feature film, was invited after Montgomery’s death to star in J.J. Abrams’ 2009 reboot STAR TREK. In 2012, fans lobbied for another cameo by Chris in STAR TREK INTO DARKNESS.

In the midst of the Vietnam War and Cold War, Gene Roddenberry put a young navigator and tactical officer from Moscow at the helm of the USS Enterprise. 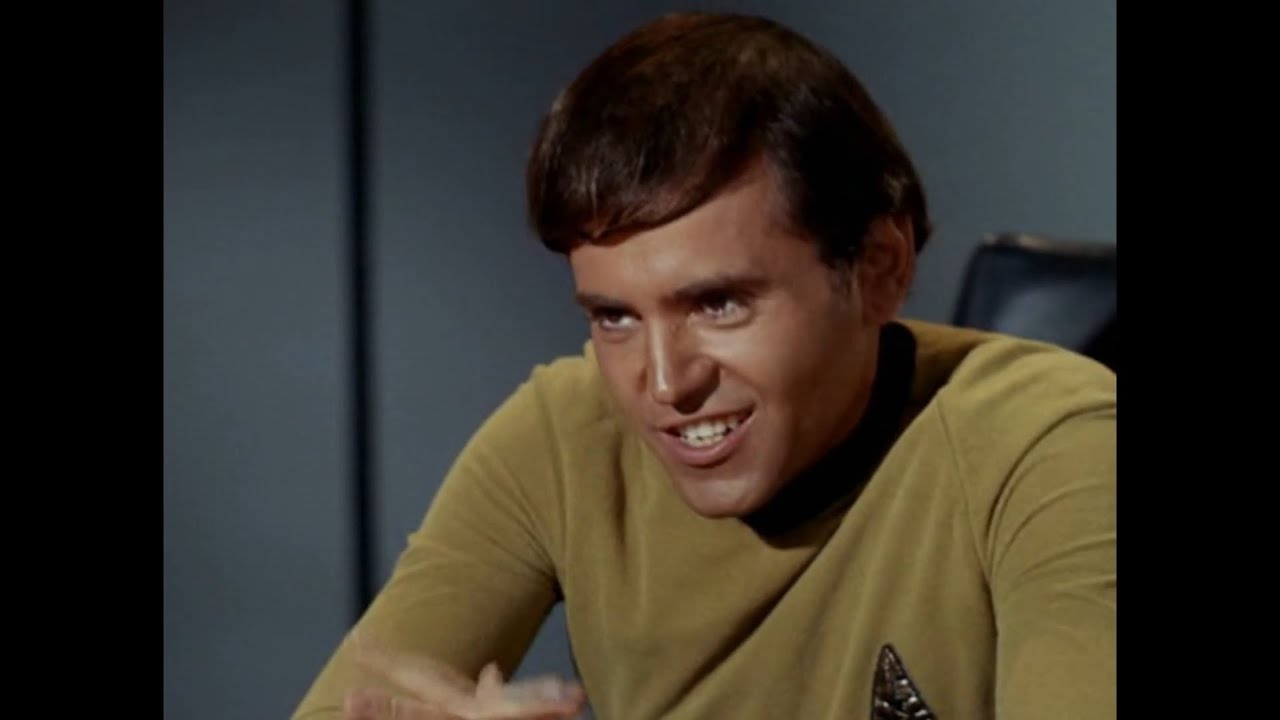 He consciously chose Chekov, who was still very young, highly intelligent, funny, and sometimes quite cheeky. Because that’s how the younger fan community should be addressed. Moreover, Chekov has erased the image of the evil Russian from people’s minds. 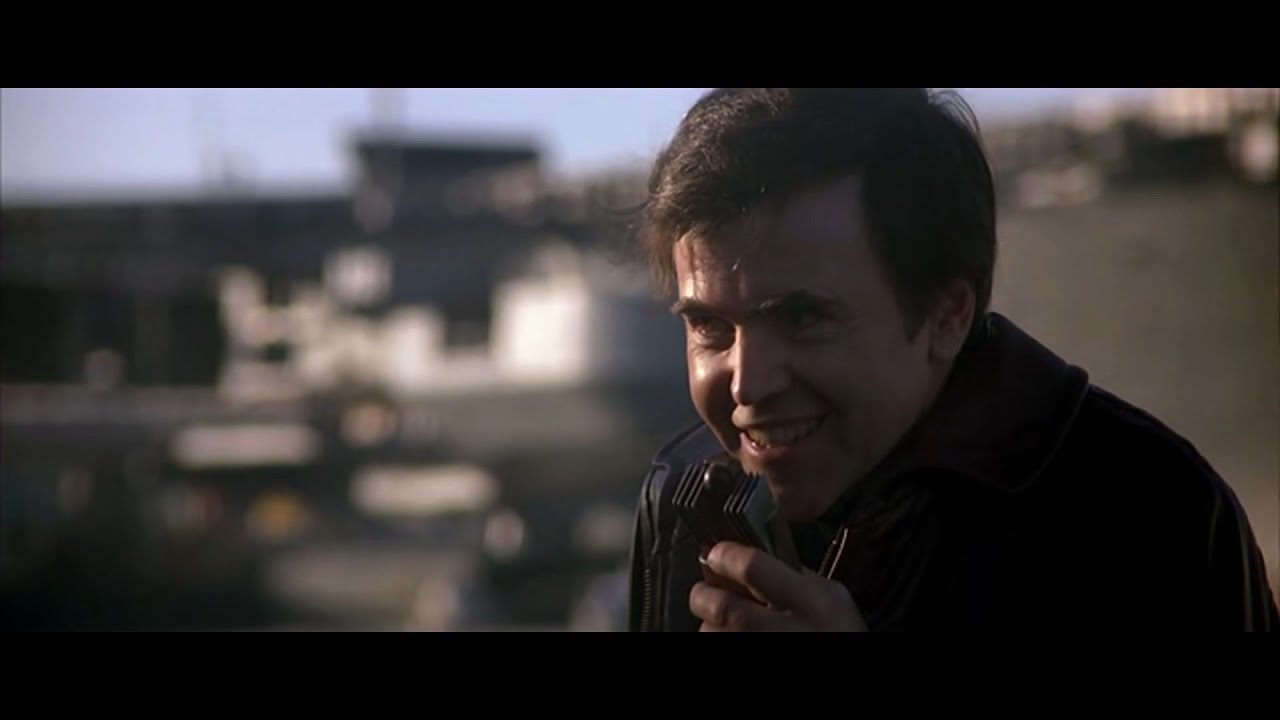 At least for a while. It is such a pity that a few continue to determine the fate of many. But we’ll get to that. Walter Koenig was not born in Moscow but on September 14, 1936, in Chicago, Illinois. However, his parents were in fact Russian-Jewish emigrants who fled the Soviet Union via Lithuania.

At that time, they shortened their name from Königsberg to Koenig. In September 2008, he was best man for fellow movie star George Takei when he married his husband Brad Altman.

Twenty-five years after Pearl Harbor, Gene Roddenberry also placed a Japanese at the helm of the USS Enterprise. After all, the flagship of the United Federation of Planets Starfleet. So, the helmsman Sulu was able to guide the spaceship safely through the galaxy for over forty years. Even more. As mysterious as the Japanese culture is in some places to this day, Sulu is just as mysterious. 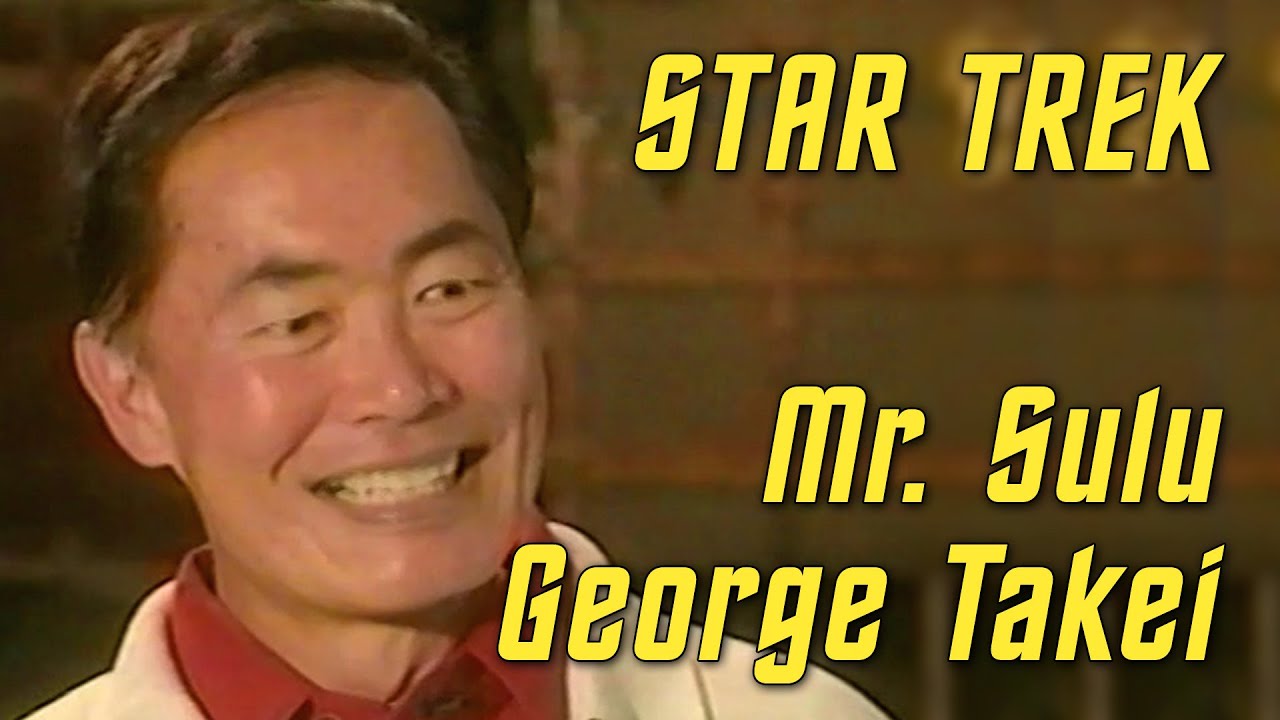 Step by step, we learn more about the hobbies and talents of the helmsman while watching the series or films. Sulu later got to command his own ship, and his daughter did the same in Star Trek: The Next Generation. 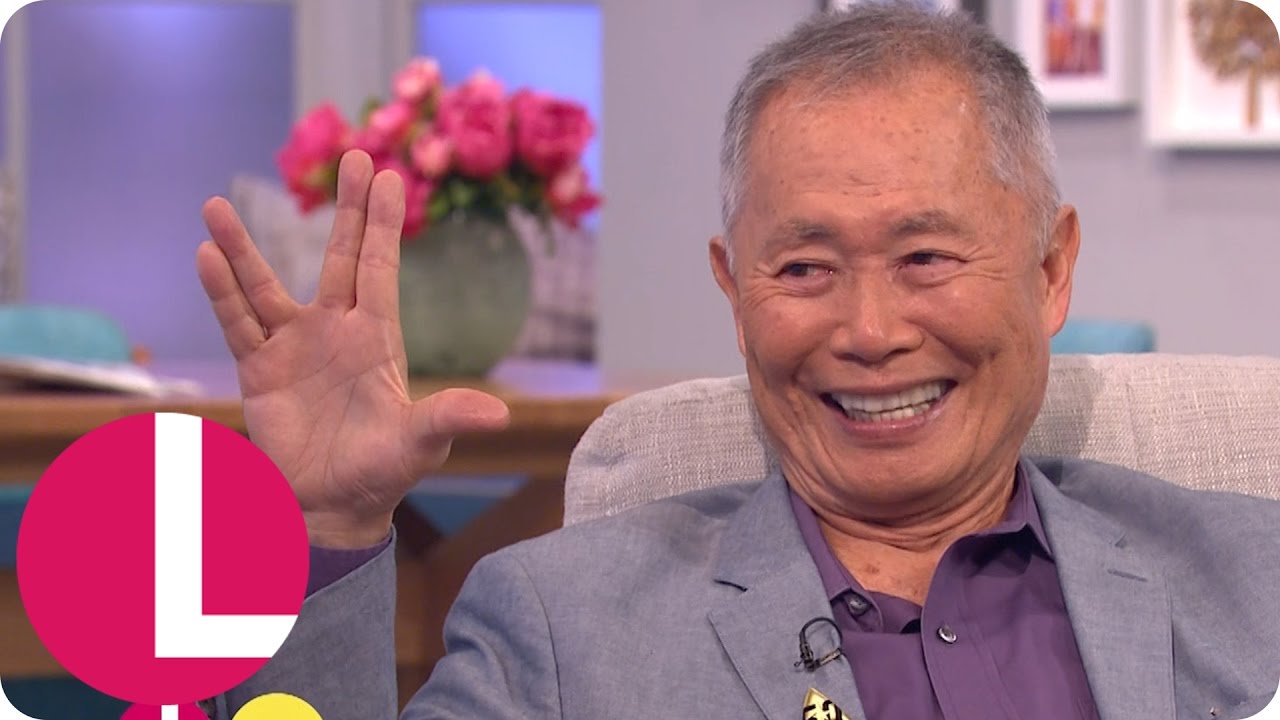 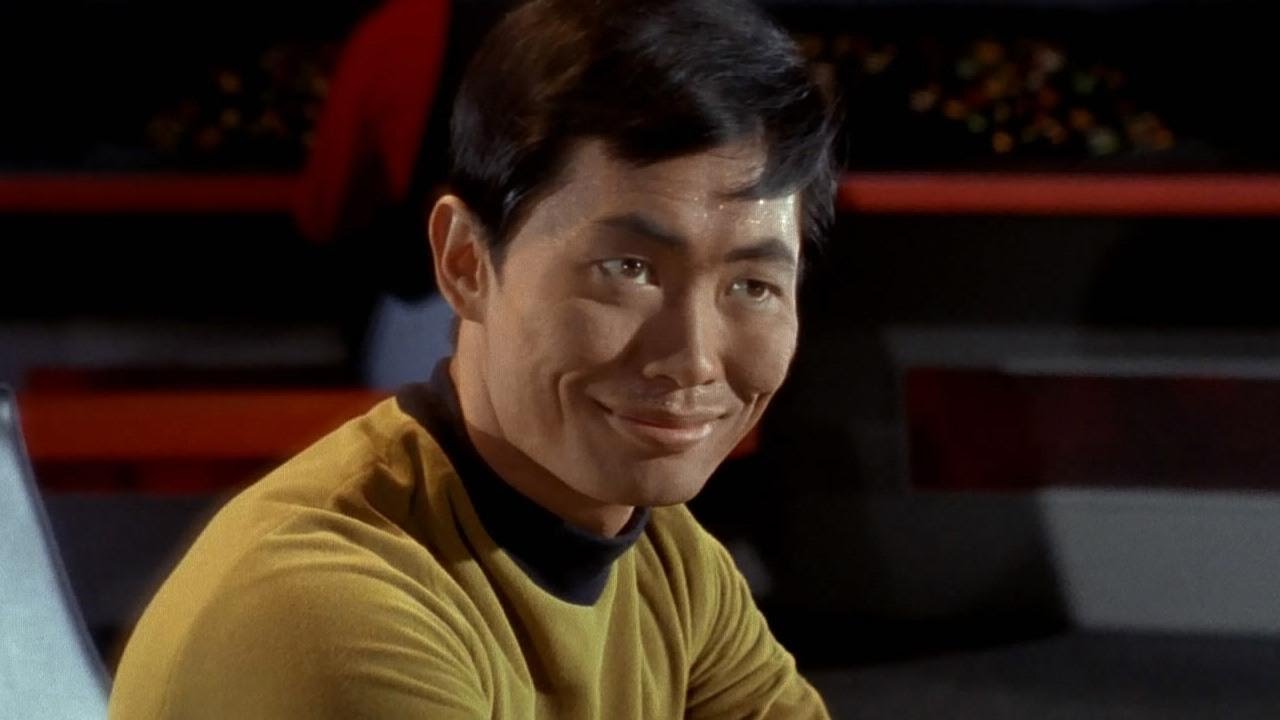 George Takei played an important role in the two worlds. As Sulu, he appeared on screen for over forty years. As a gay man, Takei had his coming out in 2005. Since then, he has become a prominent proponent of LGBT rights and active in state and local politics.

Furthermore, because of his own experiences, and through his work, on the 2012 Broadway show Allegiance about the internment experience, he became a vocal advocate of the rights of immigrants. So, you see, a franchise TV and movie series can be entertaining as well as world-changing at the same time.

Reason enough to celebrate Star Trek Day on September 8th in a special way. With this little introduction to the original characters, we’re kicking off our countdown, as well as our Star Trek Week and special sweepstakes. For the next few days, we will each ask you a question about the Star Trek universe. Watch out for what you can win:

As always, legal recourse is excluded and the competition is valid throughout Europe. We look forward to many submissions and wish you the best of luck!